Metrolinx is proposing to drop at least two stations from its plans to extend the TTC’s Line 1 Yonge-University subway to Richmond Hill—and to run part of the future line above-ground.

The regional transit agency has released the initial business case (.pdf) for the subway extension. Although the authors of the document reviewed three possible alignments for the future subway, they’re recommending a route that diverts off Yonge Street near Royal Orchard Boulevard. The line would then extend underground through the nearby residential community, then transition to an elevated structure near the Holy Cross Cemetery. Trains on the new line would then operate beside GO Transit’s Richmond Hill rail corridor, crossing Highway 407 to a new subway station on the south side of Highway 7. Trains would continue further north to a terminal station at High Tech Road. Metrolinx plans to build a new storage facility for trains serving the extended subway line near High Tech.

Metrolinx says, “Adjusting the route of the line in this area will better position the project to serve the Richmond Hill Centre and Langstaff Gateway urban growth centres, which are poised for significant development. Creating stronger connections here will mean better connections to transit, including the Richmond Hill GO train line, and less traffic congestion as communities grow.”

In the initial business case, Metrolinx argues, “This approach eliminates the need for time-consuming and disruptive tunneling and station excavations through the northern segment of the extension and limits the need for large, disruptive excavation sites for underground stations and exit buildings. This allows Metrolinx to limit property needs in areas of the surface-level alignment. By using a dedicated railway corridor that already exists, the project can be finished sooner with fewer hydro, natural gas, and water service disruptions for the community during construction.” 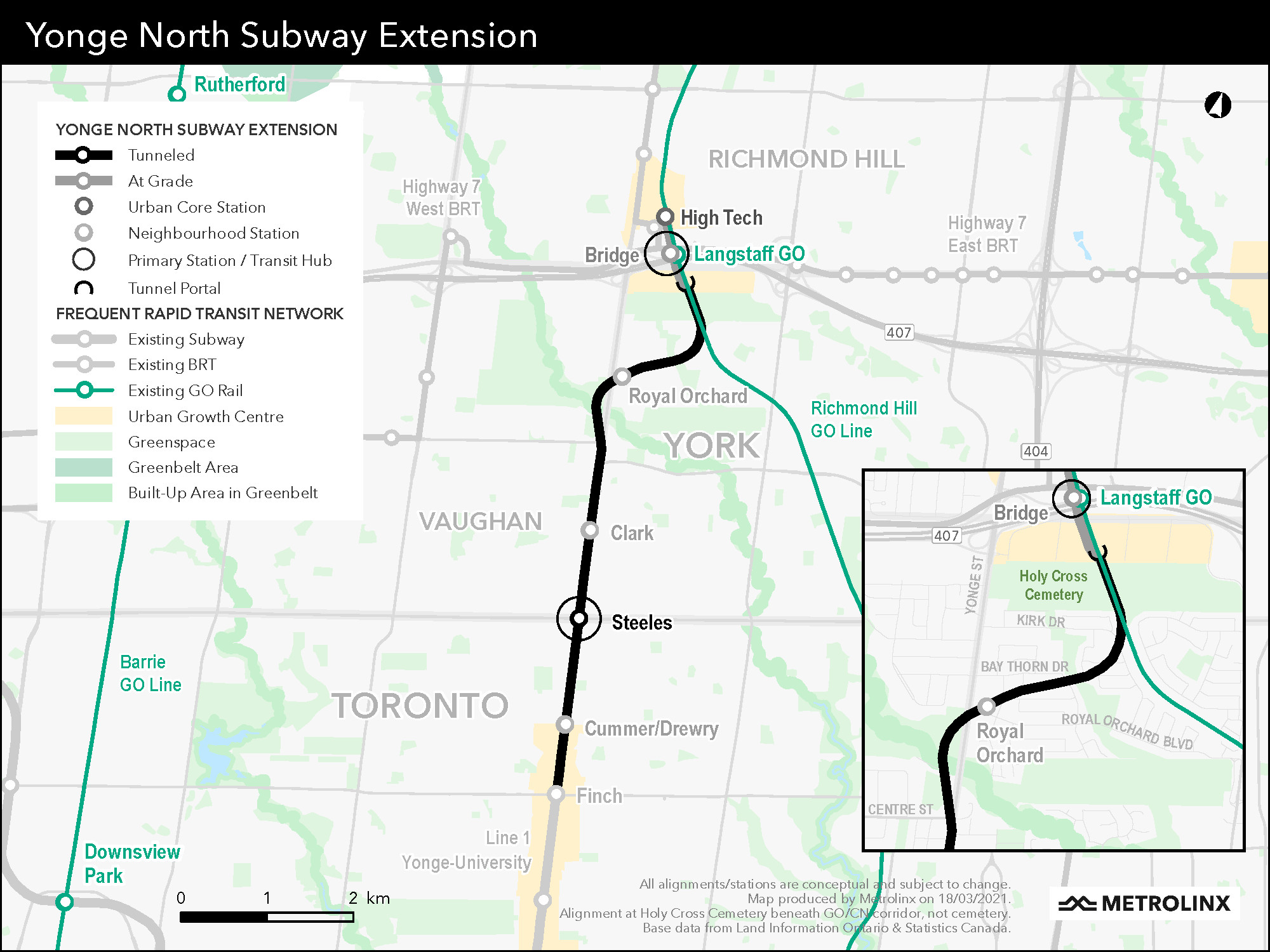 Since building above ground is also less costly, this approach maximizes the number of stations included in the project. It also positions the northern stations at sites that provide better transit connections and more opportunities for nearby communities to grow and evolve.

In April, 2009, Ontario’s Minister of the Environment unconditionally approved an environmental project report for the “Yonge Subway Extension”. The project included the construction of twin bored tunnels between Richmond Hill Centre and Finch Stations, including six stations, and an above-grade crossing of the East Don River. Subsequently, Metrolinx and York Region agreed to drop a proposed station at Royal Orchard from the scheme.

Under the new plan, Metrolinx is proposing to keep an underground station at Yonge and Steeles, but reorganizing other stations. It’s renaming the station that the environmental assessment report referred to as Richmond Hill Centre to “High Tech Station”. It’s also relocating that future station slightly southeast of the original site. High Tech Station will stand at surface level, under the bridge that spans the CN / GO rail corridor. High Tech Station will put the subway within walking distance for more than half of the residents living in the Richmond Hill Centre area by 2041.

The new station’s advantage over the former Richmond Hill Centre Station is that the footprint of the new station would be significantly smaller because it doesn’t include a bus terminal, which would, instead, be located beside the next station to the south.

The station that the planners previously dubbed Langstaff in the environmental assessment report is now east and slightly north of the original site, at surface level between Highways 7 and 407. Metrolinx is tentatively calling this station, “Bridge Station”.

A major benefit of Bridge Station, Metrolinx claims, is to provide a convenient connection to the Richmond Hill GO train line and GO and York Region Transit bus services. It will also link the Richmond Hill Centre and Langstaff Gateway urban growth centres, at roughly the midpoint of each.

While the business case reviewed the six stations that environmental assessment report studied, its authors have also determined that the $5.6 billion funding envelope for the project can accommodate just four stations, if the extension follows the new alignment. 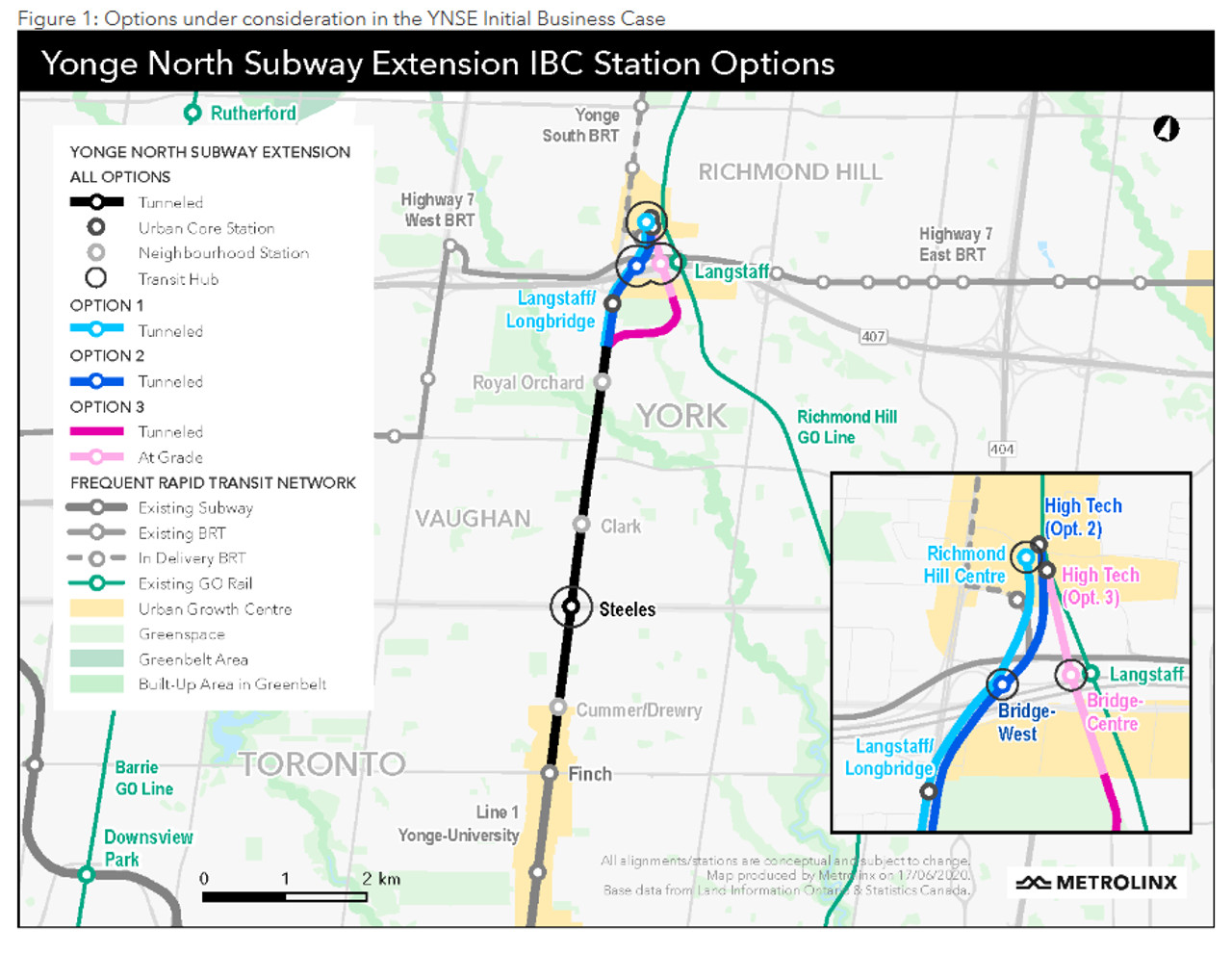 The business case suggests that Metrolinx build just one of three “neighbourhood” stations; Royal Orchard, Clark, or Drewry/Cummer stations. While each of these stations would attract fewer riders than the other stations along the future line, each of them would also serve business areas on Yonge Street and nearby residential communities. Some of these stations already have development proposals for nearby areas.

This subway extension won’t come online until the Ontario Line begins operating. According to Metrolinx, the Ontario Line, when in service, could reduce crowding by about 14 per cent on the busiest stretch of Line 1. Transfer stations like Bloor-Yonge could see crowding relief by as much as 17%.

Metrolinx says that the extension will reduce the time it takes to travel from the Yonge Street and Langstaff Road area to downtown Toronto by as much as 22 minutes – going from 70 minutes today to 48 minutes with the extension. With motorists likely switching to the subway instead of their own vehicles, planners expect the Yonge North extension will reduce the total distance travelled by cars during morning rush hour by 7,700 kilometres. This, in turn, reduces the yearly amount of greenhouse-gas emissions by 4,800 tonnes.

Metrolinx will continue to consult with municipal governments and the TTC about the project and the proposed stations. It also intends to organize and host virtual public meetings and other engagement opportunities to seek input on the project from members of the public, business people and other stakeholders.

The next step in the analysis for the project is to confirm the benefits of the extension and refine designs and delivery plans through a preliminary design business case.

What do you think of the revised alignment and plan? You can leave a comment in the space provided on this page, or join the discussion on our dedicated Forum thread, here.