A proposal recently submitted to the City of Toronto seeks Zoning By-law Amendment and Site Plan Approval to bring a purpose-built rental tower and a new public park to 185 Balliol Street, a short walk east of Davisville subway station in Midtown’s Davisville Village area. The proposed development, a joint venture between SmartLiving by SmartCentres REIT with seasoned rental operator Greenwin, will rise 35 storeys from the current site of a private tennis club and two-storey retail and residential building occupying a plot at the southwest corner of Balliol and Pailton Crescent.

Site of the proposed development, image courtesy of SmartCentres REIT

Before embarking on the complex planning of the building, the developers held an invited design competition, selecting Diamond Schmitt Architects‘ design for its balance of sensibility and striking aesthetics. The 115.8 metre-tall building joins primarily 20th-century modern rental towers that house the majority of the Davisville Village population, but exterior of sculpted, light-catching frames set the building apart as a standout amongst its neighbours.

The proposed plan includes a significant public realm contribution along the east edge of the site, designed by landscape architects Janet Rosenberg & Studio. This new 1,394 m² open space is proposed along Pailton Crescent, extending from Balliol Street in the north to the south lot line. A 477 m² share of the space could be dedicated to the City of Toronto as public parkland, while the remaining 917 m² would operate as a POPS (Privately-Owned, Publicly-accessible Space). Complementing the east side park and POPS, another public realm enhancement is proposed along the west and south ends of the site in the form of an L-shaped mid-block connection. 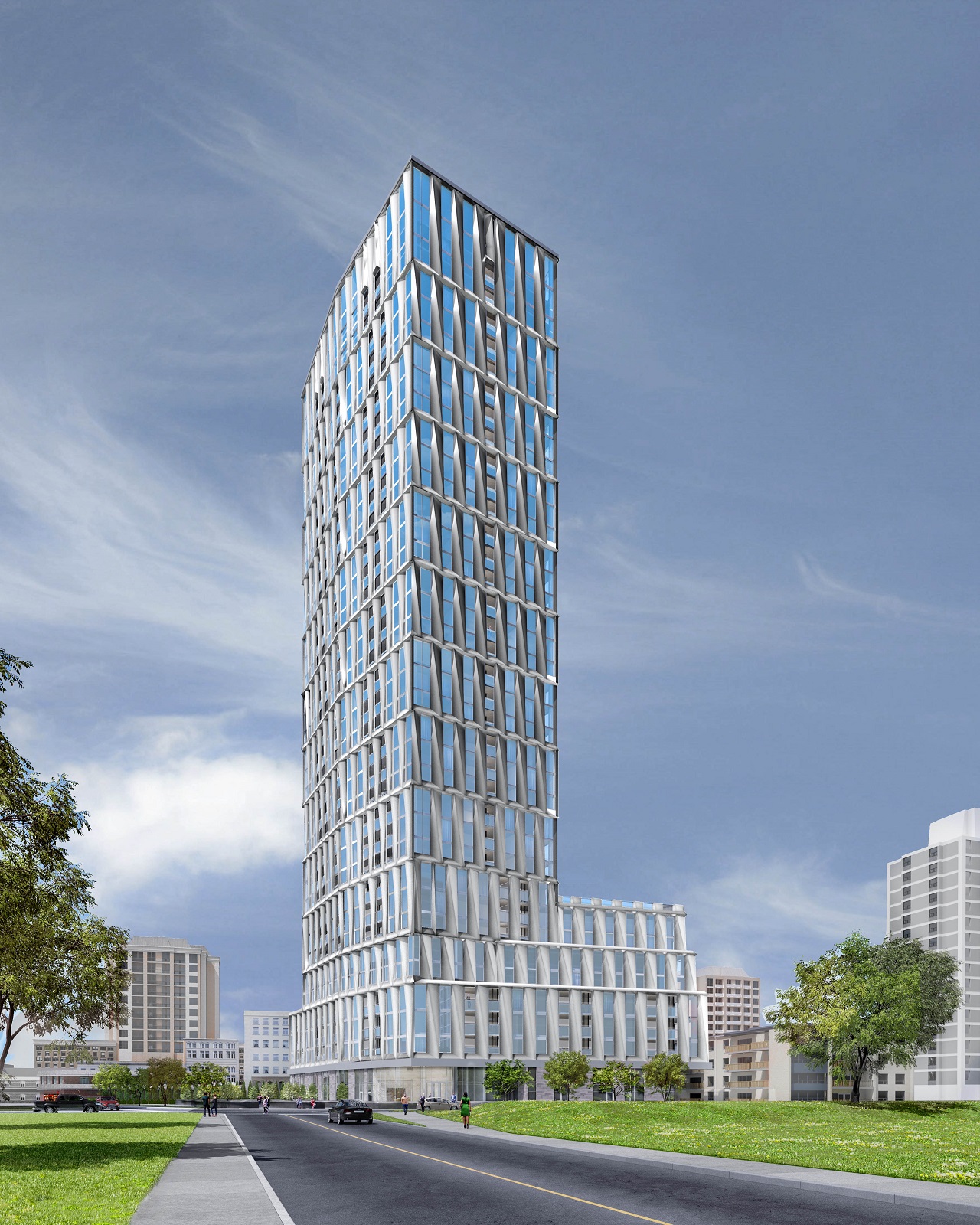 A Gross Floor Area of 32,395 m² is almost entirely dedicated to much-needed rental housing stock, while a 178 m² retail space is planned at ground level. In the tower and podium are 447 new rental units and 2 rental replacement units.

Architectural plans offer more insight into the exterior. Designed with thermal performance in mind to increase energy efficiency, the unique identity of the textured exterior provides plenty of natural light to suites while minimizing the large expanses of glazing known for their impact on energy loss. Projecting metal panels frame slender windows and perforated aluminum louvres, while balconies are inset. At street level, two-storey grade-related units and retail space will be finished in a mix of clear curtainwall glazing and solid limestone panels. 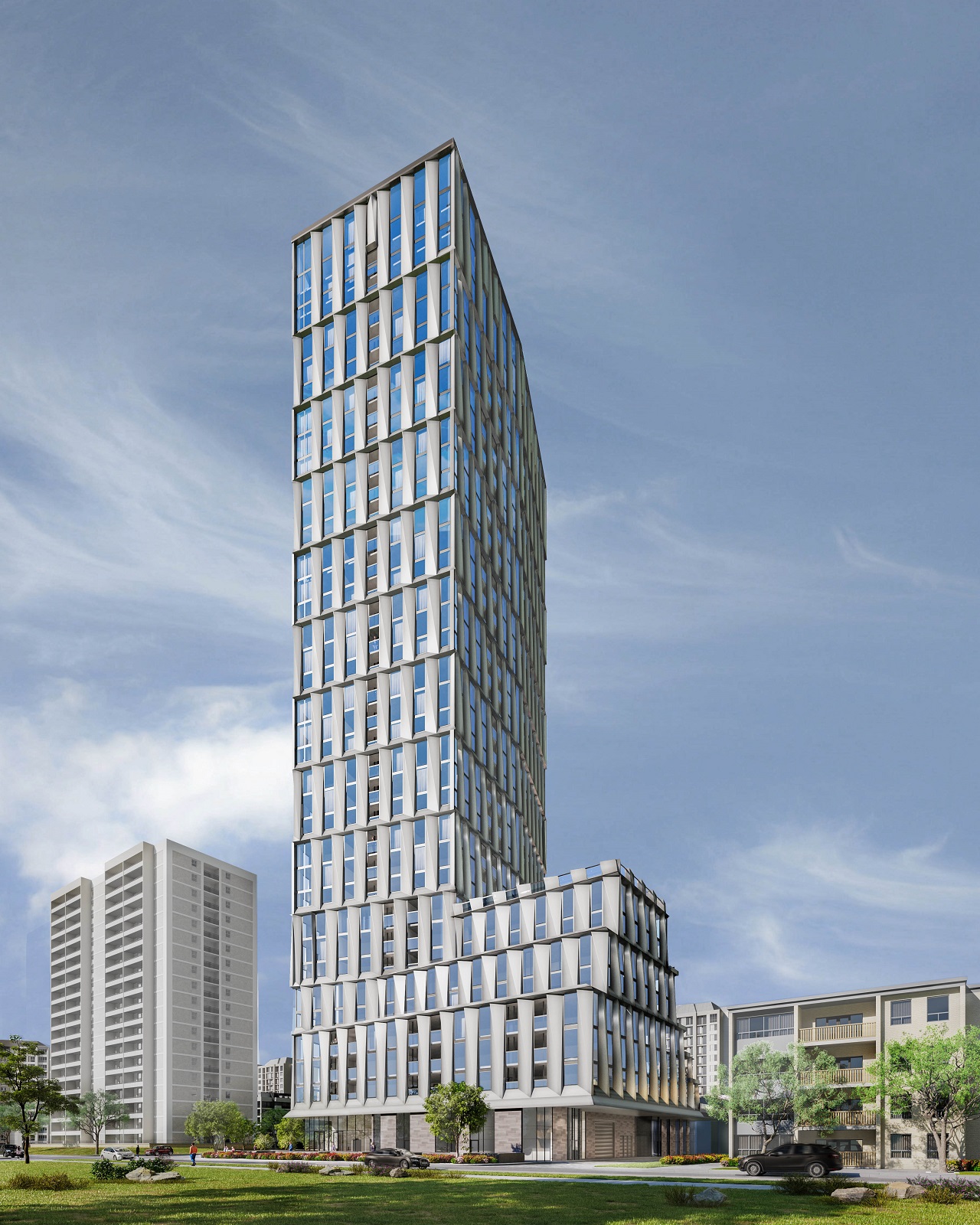 A two-level underground garage will house 113 vehicular parking spaces, 90 of them for residents and 23 for visitors. With the site’s close proximity to Davisville subway station, it is expected mosts of the residents’ commutes will be accommodated by rapid transit. A total of 456 bicycle parking spaces, located on the P1 level and ground floor, will make cycling easy for residents too. Residents will also have access to 898 m² of indoor and 505 m² of outdoor amenity spaces.

Additional information and images can be found in our Database file for the project, linked below. Want to get involved in the discussion? Check out the associated Forum thread, or leave a comment in the space provided on this page.